Alex Meixner is a nationally acclaimed musician, performer, bandleader, educator and a leading advocate of polka music. Formally trained in classical, jazz and ethnic music, Alex has cross-pollinated his versatile playing styles through pop music, funk, jazz and polka. He is an active ambassador for polka music, revitalizing interest coast to coast resulting in sold out shows, renewed cultural interest, and growing mainstream acceptance. For Alex, it’s more than playing energetic shows; it is a mission to provide a much needed positive experience that pulls communities together to celebrate history, culture and genuinely good times.

Alex’s passion for music was kindled at an early age by having the rare fortune of living in a household of professional musicians. He was cultivated intimately by his father, the 3rd generation of the family band whose leadership was passed down through generations hailing from Austria. Fully immersed in the business of music, Alex immediately gravitated toward mimicking their activities in the studio, stage and record shop. Finally, at age 3, he began formal study on the piano, and within a year he picked up the accordion resulting in his debut on stage by age 6, an experience that was to shape his life so much in future years.

And if playing those instruments weren’t enough, his ability to learn many instruments led to gigging regularly on drums, bass, keyboards, piano accordion, button accordion and trumpet with Polish polka legend Joe Oberaitis and Canada’s Polka King, Walter Ostanek, in addition to touring nationally with his father’s band by age 11. His aptitude for playing jazz and classical trumpet opened doors to formal study and opportunities including playing with the London Symphony Orchestra in High School and emerging as a highly sought after candidate for music school. He chose Ithaca College for its renowned reputation in developing music performers and educators.

While exceeding expectations in academic pursuits, he continued developing professional credentials in the polka music, recording albums for artists from the USA, Mexico, Austria, and Canada while maintaining a national touring schedule. At age 18, a track he performed on with his father was on Walter Ostanek’s, 1994 Grammy award-winning album “Music and Friends.” This performance not only added to his credibility but also started a renewed curiosity of the polka music market by younger musicians and veteran performers who had viewed this genre as a mere novelty whose popularity was past its prime.

Many Milestones on a Road Less Traveled

As a leader in the polka music cultural renaissance, Alex performs fluidly in styles hailing from Germany, Austria, Slovenia, Croatia, Italy, Spain, Poland, and America/Cleveland. His signature style pays homage to the authenticity instilled in his DNA while adding a modern twist that appeals to a broad cross-section of audiences. By creating and performing an expansive range of new and traditional music for solo, small, and large groups, Alex has expanded the vocabulary of ethnic music and continues to maintain a body of work that places him among the culture’s finest performers.

In 2016 Alex collaborated with the notable advertising agency, BBDO, to produce the infamous Hormel Pepperoni commercials contributing to a successful sales campaign and contract renewals. At the end of 2016, he recorded with comedy phenomenon, Jack Black, for the major motion picture, ”The Polka King, ” that premiered at the Sundance Film Festival in 2017. Alex’s reputation for professionalism and quality performance attracted additional commercial opportunities including performing on radio commercials for Ford Trucks and the soundtracks for numerous episodes of Moonshiners on the Discovery Network.

Alex has performed on over 50 albums, including 17 as a leader or soloist. His performance with his Father on Canadian Polka King, Walter Ostanek’s, “Music and Friends” won a Grammy Award. His album Polka Freak Out, a collaboration with Bubba Hernandez, was nominated for a Grammy Award in 2007. He has also recorded with a vast number of diverse artists as a soloist or sideman including avant-garde accordionist/ composer- Guy Klucevsek, Grammy winners- Brave Combo, TexMex Rock icons- The Krayolas and Irish entertainer- Seamus Kennedy.

In 2015, Alex formed AM Management, a fully bonded and licensed talent agency that focuses on pairing the right entertainment for Oktoberfests and themed events, weddings, and corporate events. Alex personally handpicks the entertainment and assesses the opportunities to ensure the right fit.

Alex is a formally trained educator with degrees from Ithaca College and the Pennsylvania State University. While on the road he is frequently booked for master classes, guest lecturing and as a clinician for schools, colleges, and private music schools. 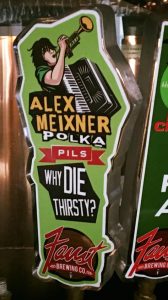 The New Braunfels, Texas-based Faust Brewery has launched the Alex Meixner Polka Pilsner in honor of the positive and growing impact Alex’s dedication to the polka music industry has garnered. It is a featured beer at the brewery’s New Braunfels tap room and other locations throughout Texas. The Faust Hotel has even named a suite after Alex to attract guests during their travels to festivals and events in New Braunfels and neighboring San Antonio and Austin areas. Alex produces a new line Alex Meixner Band apparel that is available online and during events to enhance inclusive participation at events. He maintains an extensive album of polka and ethnic music by himself and various artists available online and at gigs.

As Alex builds this multifaceted career, he remains steadfast in sharing his belief that ‘happiness is a choice.’ In a time of political, social and economic turmoil, Alex sustains the opportunity for all lovers of music, cuisine, dance and community to gather and have fun and enjoy what matters most in life.

When Alex is not performing with all of these groups, he is devoted to bringing music to students through educational clinics. You can see his CV here.