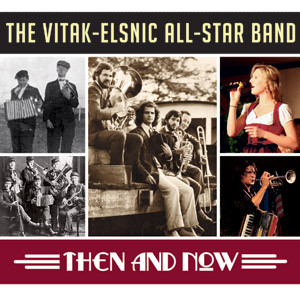 It’s been a busy week at home! Trying to keep up with the kiddos, dodging Florida rain showers and writing a bunch of new music. At the same time, we’re celebrating the release of a new CD that I produced with some of the guys in the band and a few other Polka peeps. “Then and Now” celebrates the legacy of the Vitak-Elsnic Music Publishing Company. It’s definitely not a normal “Alex album”– but it’s a really special album to me. It allowed me to revisit some classic polka tunes and perform them in an old school, traditional Midwest style as well as update a few of them into more contemporary arrangements. We’ve been sneaking a few of these gems into the live shows- so I hope you’ll enjoy checking out the album as much as the boys (and our star vocalist, Abby Broeniman) enjoyed making it. Order Your Copy Today

Back to the road this week– with a first appearance in Menahga, MN for the Sounds of Spirit Lake concert series on Friday night, August 7. I really enjoy these concert venues as many people get to check out the music that don’t normally encounter our band. It’s always fun to guess the right mix of repertoires to connect with the audiences and then see how everyone reacts. Of course, it’s always great to see some familiar faces– so if you’re around that area– c’mon by and give me a few hints of what y’all want to hear!!!

On Saturday we’re down in the Chicago area performing at a party for some fans…yes- sometimes people just email us and hire the band to play in their backyard or at their wedding, anniversary or divorce party or at the park near their house or in a tree in their neighbor’s yard… (OK– we do have to say no to some offers… and unfortunately, since it’s our living, we have to charge money for these things, but… we try to work with our fans/ friends as much as possible!)

Since we’re in the Chicago area– we’re going to play at the new Biergarten in Hoffman Estates on Sunday, August 9. It’s free admission. It’s plus there’s a special on Liters of Hofbräu Munich beer for the price of a Half Liter if you’re wearing German trachten . So c’mon by and get your hofbrau on!

And then skedaddle up to West Allis (Milwaukee) where we’ll be playing the Wisconsin State Fair on Monday & Tuesday Aug. 10-11 on the Bank Mutual Amphitheater stage at 8pm each evening. This is our first time at Wisconsin’s big party! Hope to see our Milwaukee peeps as well as some of the northlanders who are coming to support Joe Tierney, our Shawano boy who claims to be a Green Bay Packer fan.

From there- we’re jamming out to North Royalton, OH for a quick afternoon Augtoberfest at Carrie Cerino’s presented by my old buddy Geno Fedorchak on Wednesday, August 12. A great meal, a nice setting and a fun show with The Alex Meixner Band– if you’re around, give Gene a call and get some tickets, 216-642-8944.

From there we’ll continue east for gigs in PA, NY and NJ… more coming up next week… Be good– Polka on! and Don’t Die Thirsty!!