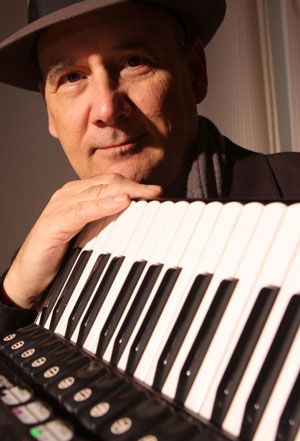 After another hot weekend in New Ulm, MN for Bavarian Blast with the band I’m actually flying out for once! I have a quick detour to shoot a tv commercial for one of our festivals and then onto New York for some completely different music with one of my heroes- the legendary Guy Klucevsek.

We have 2 shows– Friday,  July 24 at Barbès in Park Slope/Brooklyn, NY and Saturday, July 25 in Chatham, NY at PS21 Chatham— on which I will be performing duets with Guy (and he will perform a few solos) on some of his remarkable original compositions. This is a very different musical challenge for me as Guy’s music bridges gaps between so many different styles of concert and jazz music, with some occasional Balkan folk influences. We’ll be performing some of the selections we have recorded together on his “Dancing on the Volcano” and “Multiple Personality Reunion Tour” albums, as well as some new selections of his. I’m excited to put this all to test, as I’ve been practicing this music in between my gigs and honestly it’s some of the most challenging accordion music I’ve ever performed.

You can check out Guy’s recordings in my store if you’re not near us– but, if you have the opportunity to get to these performances, please c’mon out. I promise you it will be an awesome experience.

Also, as you may have heard, Johnny D’s in Somerville, MA is closing early next year.  We’re honored that we’ll be in their final season.  Show your support and make possibly your last (or first) visit to Johnny D’s on August 19 to catch a rare Alex Meixner Band club performance!  ORDER TODAY!