I’m sitting at the computer on reflecting on a very eventful week.

After we traveled to New Braunfels for a surprise appearance at the Chamber of Commerce gala and city’s 175th-anniversary kick-off event, my wife had to stay behind in Texas for a few extra days due to a nasty flu. (Thanks to Aunt P and Jim for taking such good care of her while nursing her back to health.) She eventually got home, after numerous weather delays and flight re-routing, but it was after I hit the road again with Paddy for the Accordion Kings concerts in Louisiana. I was so excited for these concerts with an all-star lineup of amazing musicians. Just being invited by Steve Riley (cajun legend and leader of the great Mamou Playboys) was an honor, let alone sharing a stage with Josh Baca, Yves Lambert, Glen Hartman (of the New Orleans Klezmer All-Stars) and Geno Delafose was a pretty daunting set of gigs.

The trip started uneventfully (which is generally a good way when driving ) until I had stopped and checked Facebook and found out a very dear family friend and musical beacon had unexpectedly passed away. Rudi Pietsch from Vienna, Austria first visited my family when I was 9 years old. His energy and passion for the music and culture of the Burgenlander Austrian people in the USA was unsurpassed. He visited, studied and jammed with my father and many of the other folk musicians in the Lehigh Valley on this and many subsequent trips in PA and FL. I always admired his attention to all of the people and their music, whether acclaimed or humble and paid tribute to him by recording his composition “Gerlinde Walzer” on my Family Tradition album in 2007. Although we weren’t consistent in communication, it was very special that I got to see, hear and perform with his wonderful group “Tanzgeiger” on a stop of their USA tour in 2017. RIP Rudi. The music lives on. 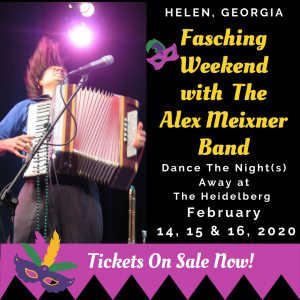 It was actually quite ironic that I received the news as I was on my way to perform on this program. I was reflecting on Rudi’s influence and was so overwhelmed on the breadth of the experiences that all the musicians brought to the stage. We all have the “Rudi’s” in our lives and seeing all of these artists expound on those influences by paying tribute to their forefathers and putting their own style in their traditions is truly inspiring. I’m encouraged to keep building my music and sharing that with my audiences. Thank you for allowing me to continue my family legacy.

The band and I hit the road this weekend up to Helen, GA for Fasching Weekend at the Heidelberg. We hope to see a bunch of our friends from Georgia as well as from around the country traveling in for some great food and gemütlichkeit this Valentine’s weekend.

Much love and music to everyone, alex