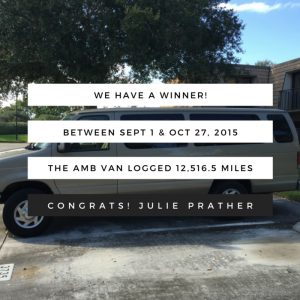 Thanks to everyone that entered our “Guess the Oktoberfest Mileage” Contest!  We had many entries with guesses from the waaayyy too low to the waaayyy too high!  Julie Prather was the winner with her submission that was only 195.5 miles off the mark!  Congrats, Julie.  We’ll be in touch about getting your prize package to you.

Even though the official Munich Oktoberfest only lasts a little over two weeks, every year the Oktoberfest “season” for the Alex Meixner Band starts at the beginning of September and finishes up at the end of October.  2015 was no exception. It kicked off at the Cleveland Labor Day Oktoberfest and completed when the AMB van rolled back into its home base of Palm City, Florida on this past Tuesday for a much earned/needed rest.

Here’s where the fun comes in! In honor of the crisscrossing of America this German tradition generates, the Alex Meixner band is running a little contest. Can you guess how many miles were racked up on the polka van between September 1 and October 27, 2015?

Entries will be accepted at alexmeixner.com until 11pm CT on Sunday, November 1, 2015. One entry per person.  The guess that comes the closest to the actual number will win an Alex Meixner Band merchandise gift pack filled with items of our choosing. (Don’t worry, it will be cool stuff.) In the event of a tie, the winner will be selected by a random drawing.  (P.S. entering this contest will add you to the AMB mailing list.)