Alternating sets with a DJ Now in its third year, the three-day festival at the El Paso County 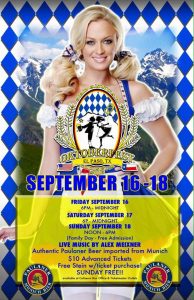 Alternating sets with a DJ

Now in its third year, the three-day festival at the El Paso County Coliseum will feature Paulaner beer and steins, both imported from Germany. There also will be authentic German food from the German Pub restaurant, as well as music.

Headlining the event is the Alex Meixner Band. Meixner is a Grammy Award-winning accordion player whose group performs modern hits and traditional German polka in a unique and energetic way.

“It’s the biggest party in the world,” Marco Andresen said during a news conference to announce the festival in July. Andresen is co-owner of the German Pub restaurant, which will provide the schnitzel, wurst, pretzels and other German food during the festival. “On Fort Bliss (Oktoberfest) was done for 41 years, so it’s a huge tradition here in the city and since the German air force is not doing it anymore … we’re keeping on that tradition.”

Paulaner’s Wiesn beer will only be available at the Authentic El Paso Oktoberfest, according to organizers. The beer is only brewed for four weeks a year, specifically for the festival in Munich. Very limited amounts are available in other parts of the world, organizers said.

The festival also will feature Paulaner’s Oktoberfest and Kleiner Feigling, a German liqueur made of figs that is a favorite among festivalgoers in Munich.

The final day of the festival will offer free admission for families and feature free activities and games for children.