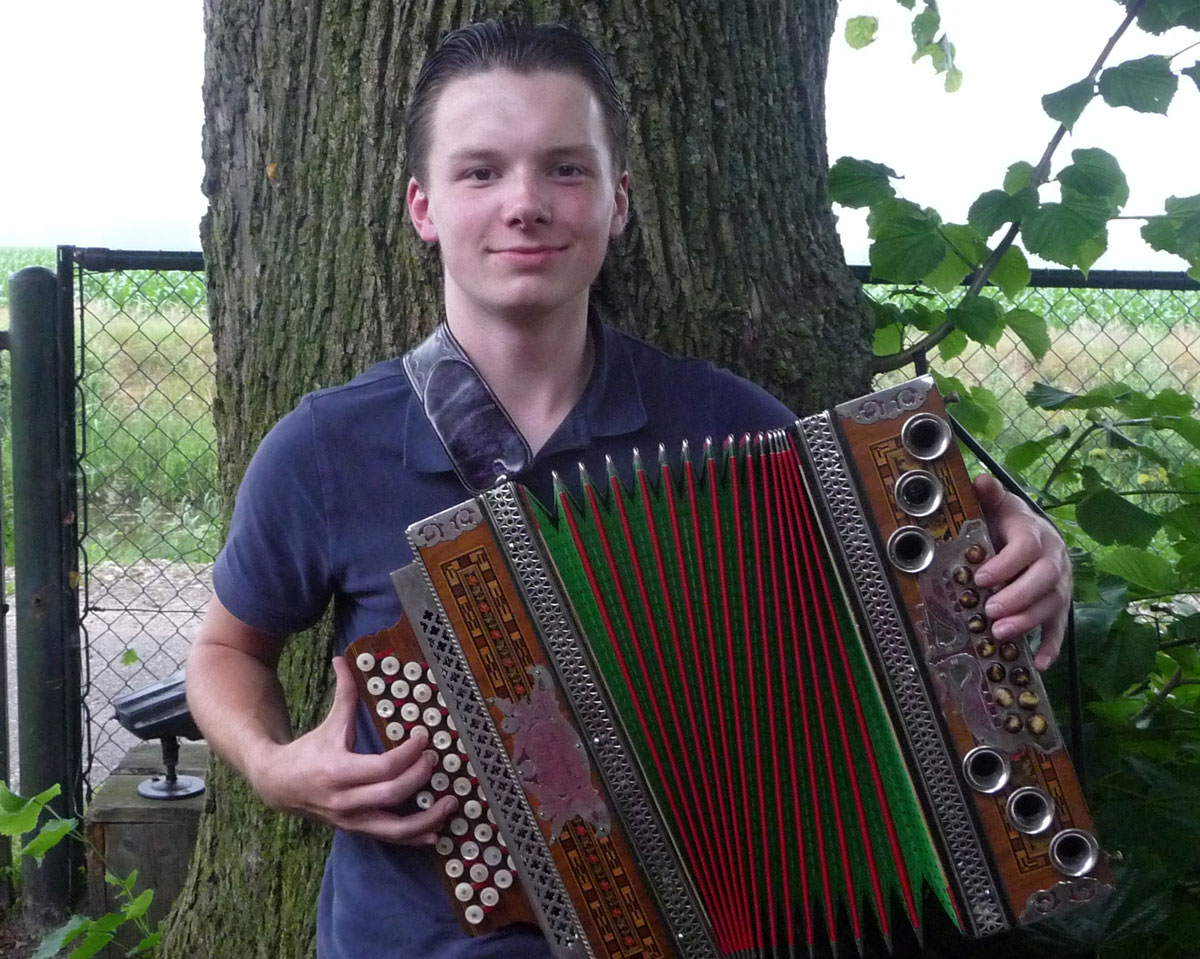 I'm posting an English translation of a recent newspaper article on Christiaan Bodewits, one of my students via Patreon. It's so exciting to share the love of learning Button Accordion music online (as well as in person when possible.) The online lessons have allowed me to work with students like Christiaan in the Netherlands, as well as in Canada and throughout the USA. He is learning by ear (in addition to videos I share after the lessons that show different angles of the grips/ fingering patterns) but many of my students use written music in their lessons as we work through a variety of repertoires that are geared to the student's interests as well as encouraging their musical development.

"Christiaan Bodewits is just 15 years old and completely addicted to his button box accordion. He arrives with 2 heavy suitcases and as soon as he has his accordion in his hands, the pre-university student changes from a happy braceface into a seriously concentrated musician.

Tell us about your instrument.

This button box was built in 1925 by the Slovenian-born Anton Mervar. He emigrated to Ohio in the United States before the First World War and made about 1,700 accordions there, until he died in an accident in 1942. The sound is very special: a bit rougher than my new Beltuna. That box has a louder, more common sound and is easier to play. The bass sound is much heavier and it needs less air. But the Mervar sound is second to none! This button box needs some love, but I am planning to overhaul it myself.

Can you also play jazz?

That will be difficult because there are only a few half notes on it, but I would like to try that once. I can't read music, but I can imitate it from the internet.

Can't read notes? How did you learn it then?

How did it all start?

I always listened to radio pirates and therefore regularly heard a polka passing by. I think polkas are beautiful and I've figured out which instrument produces those thick, heavy basses. That turned out to be a button box accordion. Through hard work I saved 400 euros and bought my first instrument when I was 13. It is a bit smaller than these two accordions, but it also sounds very good. I have been taking lessons from Alex Meixner for a few months now; a legend in the polka world and a very nice and good teacher.”

What attracts you to polka music?

I think it's beautiful, happy music and the sound of the accordions remain beautiful."

Do you want to make it your job?

No, I'm going to be a truck driver, that's been a dream of mine for a very long time. But if I were very wealthy, I would work for a few years at the accordion factory in Austria or Slovenia to learn everything about building button boxes: overhauling, cleaning, tuning, making bellows, making reed blocks, assembling and tuning mechanics, painting and engraving the metal decorations. But unfortunately there is hardly any demand for it in the Netherlands, so I am going to be a truck driver.

You don’t need a high school diploma for that.

No, but if it turns out that the truck life doesn't suit me, I still have the opportunity to do something else. I have no idea what yet, but the possibility is there.

What do you do when you are not at school or at work?

Working at various machines and listening and practicing a lot to my music.

Have you ever played in front of an audience?

Coincidentally, last week for the first time, on the birthday of a radio pirate. Very exciting but also very fun and the birthday boy was also enthusiastic. I also regularly post videos on social media. I get nice reactions to that, a sign that there are still fans out there."