Renowned musician, composer of “Why Die Thirsty” and good friend Randy Koslosky shared these kind words in the recent IPA (International Polka Association) newsletter upon the announcement of my induction into the Hall of Fame. I am humbled and inspired to continue doing my best to advance my musical skills and live up to the expectations to continue evolving to entertain my audiences. For further information- please consider joining the International Polka Association at www.ipapolkas.com

An Anecdote About Alex 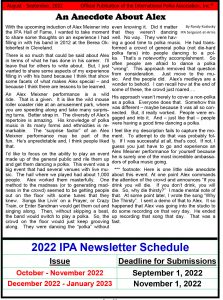 With the upcoming induction of Alex Meixner into the IPA Hall of Fame, I wanted to take moment to share some thoughts on an experience I had filling in with his band in 2012 at the Berea Oktoberfest in Cleveland. There is so much that could be said about Alex in terms of what he has done in his career. I’ll leave that for others to write about. But, I just wanted to share some aspects of my experience filling in with his band because I think that show some facets of what makes Alex special – and because I think there are lessons to be learned. An Alex Meixner performance is a wild ride. That is a given. It is like the wild mouse roller coaster ride at an amusement park, where you are speeding along and take many surprising turns. Better strap in. The diversity of Alex’s repertoire is amazing. His knowledge of polka music in its many forms and ethnicities is remarkable. The “surprise factor” of an Alex Meixner performance may be part of the fun. He’s unpredictable and, I think people liked that. I’d like to focus on the ability to play an event made up of the general public and rile them up and get them dancing a polka. This event was a big event that had several venues with live music. The hall where we played had about 1,000 people. Alex worked them masterfully. One method to the madness (or to generating mad-ness in the crowd) seemed to be getting people out on the floor with some tunes that they knew. Songs like Livin’ on a Prayer, or Crazy Train, or Enter Sandman would get them out and singing along. Then, without skipping a beat, the band would switch to play a polka. So, the crowd on the floor would just keep grooving along. They were dancing the “polka” without even knowing it. Did it matter By Randy Koslosky that they weren’t dancing IPA Sergeant-at-Arms well. No way. They were having a good time to polka music. He had transformed a crowd of general polka (not die-hard polka fans) into people dancing to a polka. That’s a noteworthy accomplishment. So often people are afraid to dance a polka “wrong”. This approach removed that question from consideration. Just move to the music. And the people did. Alex’s medleys are a wonder to behold. I can recall how at the end of some of these, the crowd just roared….

His approach wasn’t merely to cover a non-polka as a polka. Everyone does that. Somehow this was different – maybe because it was all so connected. But, it really worked. People were engaged and into it. And – just like that – people were having a good time dancing a polka. I feel like my description fails to capture the movement. To attempt to do that was probably folly. If I was successful at all, that’s cool. If not, I guess you just have to go and experience an Alex Meixner performance for yourself because he is surely one of the most incredible ambassadors of polka music going. *** footnote: Here is one little side anecdote about this event. At one point Alex commands the attention of the crowd and announces “If you drink you will die. If you don’t drink, you will die. So, why die thirsty?” I made mental note of that. At some point later, I wrote the song “Why Die Thirsty”. I sent a demo of that to Alex. It so happened that Alex was going into the studio to do some recording on that very day. He ended up recording that song that day. That was a fast turnaround.