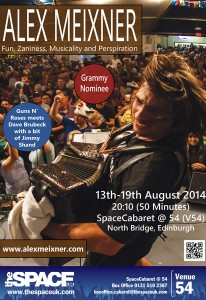 Alex will be performing for one week, August 13 – 19, 2014 at the SpaceCabaret@54 in Edinburgh, Scotland as part of the Fringe – the largest arts festival in the world.  In 2013 the Fringe had 24,000 performers from 52 countries doing 45,000 performances at 273 venues during the 3 week festival.  Creativity knows no limit through theatre, comedy, music, and dance.  Alex will be bringing his unique mix of accordion and trumpet to the Fringe, fusing together his high energy, original songs with a collective mix of rock’n’roll classics and traditional folk music – all with an unexpected musical twist!